July something-or-other (or the ramalamalong-weekend as I call it) marked the first day of a yearly tradition of a weekend of camping and incessant alcoholism.  As this was my first year I decided it was fitting to take mental notes in hopes of writing them down on paper in a time line like manner!  Keep in mind NPX was also there, as well as the other Space Boner author, whom we won’t mention because she’s a girl.

Text between NPX and RLLD

NPX:  “Ugh, you’re an asshole for missing last night!  The bar was CRAZY!”

RLLD:  “I was in bed early after saving a family from a burning house fire.”

NPX:  “Nope.  I wouldn’t waste booze on that.  Are you ready to come camping?”

Unfortunately, at that moment I was tied up and had to put him off for a moment until I could get back to him.
When I was ready I sent him a text, inquiring about some last-minute directions and as usual he was of the utmost help. 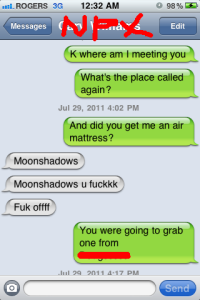 Luckily, Fuckhead was spot on with his directions, and I only drove 30 KM in the wrong direction before I regained cell reception and google maps came through for me.
So despite his best efforts, I made my way to the promised land, and ahead of me awaited 4 days, 3 nights, of the most intoxicated near death experiences.

RLLD:  Is that our tent?

Bryan Parker:  Hey, whose stuff is in my tent?

We were all set up, some of us for the second time, and the festivities were just beginning.  Wood was being chopped, posts were being pounded for Beersbee, and Bags were set up for the less manly people to play.

I should at this point explain the rules to Beersbee.  The object is to stand an empty beer can on top of a stick in the ground by both teams, and you in turn try to knock the beer can off the post with the Frisbee for points.

Apparently, as a drinking game there are circumstances where you have to drink depending on what either team does, but don’t ask me what they were because we got right alco-fucked on our own no matter how we played.

Now despite our differences NPX and I, were and still are the Beersbee Grand Champions of the fucking Universe.  The closest thing we came to a loss was after about 32 beer (see 7:30) and about 4 substitutions by the other team.  Despite it all, nobody could touch us, and just as with every other beer in site, we destroyed that can effortlessly.

From this period my memory is a touch hazy and I am pretty sure it was mostly filled with chain-smoking and mingling.  At some point NP-drunken fuck-X, kicked a folding chair perfectly into my face swelling my lip and causing me to spit alcoholic blood (closer to bloodied alcohol at this point) onto my hands, which was the highlight of the weekend.  Out of sheer spite I will not touch on this any further.
(ED’S NOTE: BAHAHAHAHAHAHAHAHA! -NPX)

Anyway, these next few hours would set apart the men from the boys.

So now it’s just NPX, myself and a mutual friend, whom I mentioned earlier and we will dub Bryan Parker for anonymity’s sake (and lawsuit purposes).  The night is going well at this point, as I have had so much to drink, infection for my lip wound from the chairilyzer is but an impossibility.  Sure makes things easier when you have to pour liter after liter of booze over the wound without choice!

So, by now absolutely everything said between myself and NPX is pure comedic genius.  In fact, what we say is SO funny, I am sure a higher power created booze for the sheer purpose of preventing us from remembering any of it, repeating it, and causing a disruption in the space-time continuum.

Butted out a cigar on NPX’s arm, and peed my pants laughing.  Everything tastes like blood.

Bryan Parker is showing signs of excessive drunkenness.  NPX and I are leading the charge.  Everyone else had gone to bed, probably to knit sweaters fo their gay lovers.

Bryan Parker just lit a cigarillo filter first and is handed another beer to help ease the embarrassment.

Captain Morgan we have a problem!  Bryan is not looking too good and claims he has to go to bed.  He agrees to shotgun one last beer before he is allowed to leave.

Bryan lost the shotgun contest, but is drunk enough to believe us when we tell him he won.  He wins another beer!

Bryan is gone to die in his tent.  NPX and RLLD proceed to tell jokes again and laugh like school girls all night long.

Time for the Pig Roast.  Where we make fun of girls who wouldn’t sleep with us for some reason.

Couldn’t think of anyone.  Back to the drinking and pissing of sleeping campers/pussies.

The sunshine can suck my dick!  Time for bed, as well as trying not to fall into the fire while putting it out, with excessive yelling and giddy laughter.

Looks like Bryan Parker survived, so he and his sister, Bail Morgana, felt it to be their duty as sisters to wake up NPX and RLLD from their drunken coma.  Dreamt about a bunch babies having a hammer fight in a dumpster.

Ate whatever the hell I could carry and made my way to the shower to wash off excess booze-sweat.

Forgot my towel, dammit.  Absolutely hate life.  Probably would have handled it better had I not been transitioning from drunk to hung over.

I can’t really recall anything that happened that afternoon other than we hauled some big dirty rope across the river of slippery current death.  This was a dumb idea as Bryan Parker and I did all the work, only for us to never use the rope for anything other than decapitating unsuspecting  tubers floating down the river!

NPX and I have found the perfect spot on the rope to sit while leaning into the current and drinking beer.  Only issue, stupid people on shore too lazy to pass us four beer at a time.  Polluted the river with our urine.  We laugh at the people downstream and shout unheard comments.

Finally, drunk again!  It’s time to get out of the river and get changed into some dry clothes!

More Beersbee embarrassment!  I am surprised nobody hated us for the merciless thrashing dished out upon them.  Team Crynihilation perfects the High Five.

Oh no!  Wild throw from team suckshit!  The Frisbee is in the river!  Good thing I am wearing my superman shirt.  Dum-dee-dee-dum-dum!

I am soaked… my cigars are ruined… my wallets soaked.  Oh, and someone grabbed the Frisbee from the shore so it was all for nothing.  Gay!

The pussies have all gone to bed to sleep off any hangover they may have after a day of drinking 5 beer.  Now it’s NPX myself and 3 girls going strong!  I like these odds!

Playing bartender to the ladies!  I am now a pro at making ParaRyzers, Caralyzers, and Pina CRYladas.  Ladies love em!  Next year lube should be included in the budget!

Enough booze consumed by this point to kill an Elephant.  I am feeling a buzz.  NPX acts as though he’s just rinsed his mouth with Scope.  Pretty sure the girls all did each other by the fire.  It’s my story and I’ll tell it how I want too!

I won an award for best Understater of the year!

The morning sun has vanquished the terrible night and is again hovering ten feet above our tent.  Sweating urine.

Going into town seems like a good idea!  Could use some more clothes!

Looks like I forgot my house key.  There goes 3 hours of drinking.

Driving back to booze central I see the distinct colour of NPX’s tears (beer-coloured) as he passes us on the highway headed for what I can only imagine to be a warm bed and an all day buffet.

…I am the king of the mountain!

Drank all day, and told jokes nobody but NPX would ever have had a chance at getting.  Hate life…

So bored decided to play ‘Are You Smarter Than a 5th Grader?’  5 grown men at least 30 years of age were in fact not smarter than a 5th grader, and the worst part being one of the men was at one point, a 5th grade teacher.  Why did we keep playing this!?

One girl has barred me from ever making her a drink again!  Ten minutes later I am mixing her a drink at her request.  I guess the bar is far away from the campfire.  I remember, NOT remembering pouring 3 ounces of vodka into ice, forgetting I did it, adding mix, then adding 3 ounces of Gin to make up for the lack of booze.  I miss NPX.

Quite possibly could have had the greatest drunk night of my life.  Unfortunately, I was in fact drunk and probably missed out on all of it.  Heard Fallen by Volbeat 27 times at this point.

Tent not filled with the stench of stank, drunken ass and stale farts.  First time I didn’t miss NPX.

Showering is for homos.  I’ll end up in the river inadvertently sooner or later.

Operation water down the hangover with more beer to prevent it from developing into a crippling coma is a go!

“Hey, let me throw you this rope!  Just stand with your sandals on the slippery rocks.”

Maybe a nap will save me from vomiting my brain cells out of my nose?

Packed up and good to go!  I survived the weekend.  I am sure I drank more than everyone and thus, have completed my ascent into manhood!  Now where are my keys?

Well, the after party has started again…  My liver is now the hardest substance on earth.

Testing my liver.
And my balance around fire.
Camping is in tents.
—RLLD

LENGTH OF THE SPACE BONER